Poland has made important contributions to the lung cancer screening agenda in Europe.

Poland has made important contributions to the lung cancer screening agenda in Europe since it first initiated implementation research into LDCT screening in 2008.1 To date, pilots in Szczecin, Gdańsk, Poznań and Warsaw have screened almost 50,000 people in total: approximately 1% were confirmed to have lung cancer, and between 64% and 70% were diagnosed at stage I.2 This is important, as there are more options for treatment of early-stage lung cancer (e.g. curative surgery), which improves survival.

A short summary of LDCT screening pilots in Poland

The national programme in Poland

Poland is the second country in Europe to implement a nationwide LDCT screening programme for lung cancer,10 11 a protocol for which was published in 2019. The National Program of Early Lung Cancer Detection (Ogólnopolski Program Wczesnego Wykrywania Raka Płuca, WWRP) officially began in 2020.

As a centrally administered programme co-financed by the Ministry of Health and the European Social Fund,12 it is currently being rolled out in a phased approach. Over the course of three years, it seeks to enrol 16,000 participants aged 50–74 across six macroregions in Poland.

Six research centres have been selected to lead the implementation. The aim is that, as the WWRP expands, these become ‘centres of excellence’ that can provide guidance to other sites on lessons learnt from implementation:

To support delivery of the programme, a cloud-based platform designed in collaboration with the International Early Lung Cancer Action Project (I-ELCAP) was rolled out to all participating sites. The platform centralises epidemiological and clinical data collection, and houses resources to support screening staff, including guidelines for radiologist decision-making and a range of interactive tools (e.g. risk-prediction models to guide eligibility for screening). 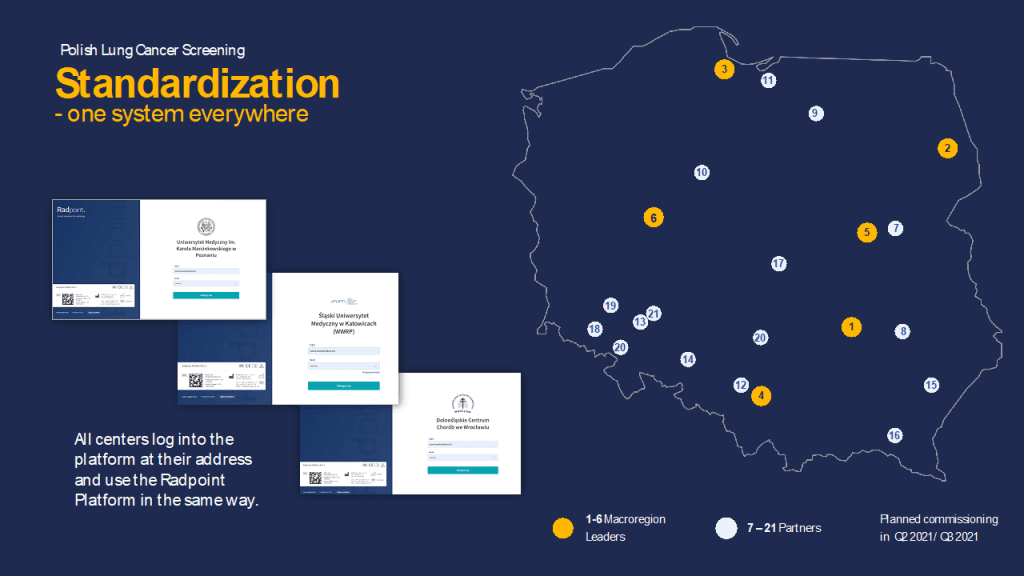 Next steps for screening in Poland

Smoking remains an important challenge in Poland.14 The Ministry of Health runs a prevention programme for tobacco-related diseases, which involves counselling via smoking cessation clinics.12 However, embedding smoking cessation within the screening pathway is an area of ongoing development.13 It has been rolled out successfully in some WWRP sites following a tailored approach, although not all sites currently have access to a smoking cessation clinic.

Challenges have also been caused by the COVID-19 pandemic, which resulted in a temporary pause in recruitment in 2020. Interest in participating in the programme also gradually slowed once recruitment resumed. A mass media campaign and strategies to engage healthcare professionals were therefore evaluated to understand which was best to sustain interest. As a result, almost 14,000 people have received LDCT screening via the WWRP to date.

Additions to the cloud-based platform are planned, such as a teaching module for radiologists for quality assurance. Partner institutions also provide computer-aided detection (CADe) software that utilises artificial intelligence (AI) to support the evaluation of scans.15

The first term of the WWRP is due to end in 2023. To secure funding for a new term, the programme leads aim to build better awareness of the benefits of LDCT screening and develop resources designed to ensure that delivery aligns with workforce capacity within the programme. Implementation studies are also ongoing to assess the role of biomarkers in supporting the selection of a population at high risk of lung cancer for screening.16 17 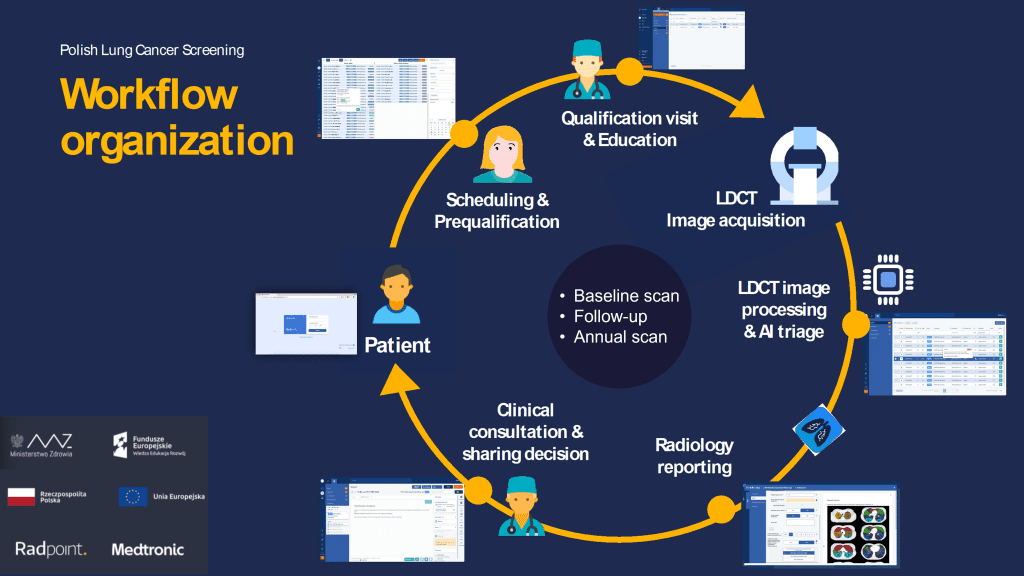 The Lung Cancer Policy Network is publishing brief case studies of countries that have implemented LDCT screening; you can read other examples here.

We will also continue to build the extensive implementation research in Poland into the second edition of the map.

Since 1987, Japan has offered chest X-ray screening to people aged 40 or older. However, LDCT screening in Japan is commonly performed on a voluntary basis.

Since 1987, Japan has offered chest X-ray screening to people aged 40 or older. However, LDCT screening in Japan is commonly performed on a voluntary basis.

We speak to Witold Rzyman, Chief Surgeon at the Department of Thoracic Surgery, Medical University of Gdańsk, Poland.

We speak to Witold Rzyman, Chief Surgeon at the Department of Thoracic Surgery, Medical University of Gdańsk, Poland.

The Lung Cancer Policy Network welcomes the inclusion of lung cancer in the EU Council Recommendation and now looks towards the implementation of effective lung cancer screening programmes.

The Lung Cancer Policy Network welcomes the inclusion of lung cancer in the EU Council Recommendation and now looks towards the implementation of effective lung cancer screening programmes.